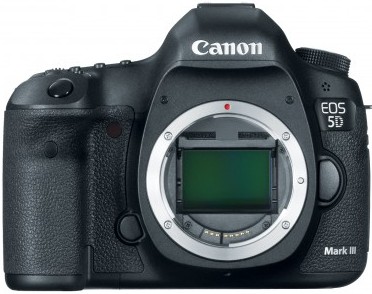 Newly Developed Canon CMOS Sensor
With its completely new 22.3-megapixel full-frame Canon CMOS image sensor, the EOS 5D Mark III becomes the highest resolution Canon Digital SLR released to date. It is eminently suitable for a wide variety of assignments including weddings and portraits, nature and wildlife, travel and landscapes as well as commercial and industrial photography. With a gapless microlens design, a new photodiode structure and improved on-chip noise reduction, the new sensor achieves higher sensitivity and lower noise levels for both RAW image data as well as in-camera JPEGs and EOS Movies compared to the 5D Mark II. The result is outstanding image quality in all shooting conditions, even low light. An eight-channel readout doubles the speed of image data throughput from the sensor to the DIGIC 5+ processor, resulting in better video image quality as well as six fps for still photos.
The low-light capability of the EOS 5D Mark III is evident in its incredible ISO range and image quality in poor lighting conditions. Adjustable from ISO 100 to 25,600 within its standard range, the new model also offers a low ISO 50 setting for studio and landscape photography and two extended ISOsettings of 51,200 and 102,400, well suited for law enforcement, government or forensic field applications.
The new 5D Mark III is also equipped with Canon’s EOS Integrated Cleaning System, featuring a Self Cleaning Sensor Unit with a fluorine coating that repels dust and dirt particles.
Canon-Exclusive DIGIC 5+ Imaging Processor
The EOS 5D Mark III’s new DIGIC 5+ Imaging Processor is 17 times faster than the DIGIC 4.The EOS 5D Mark III uses that extra speed not only for improved image quality, but also to add no less than nine new features that do not exist on the 5D Mark II. These new features include six fps continuous shooting, HDR and Multiple Exposure modes, in-camera RAW processing, a comparative playback function, Scene Intelligent Auto mode, two forms of movie compression, and support for high-speed UDMA 7 Compact Flash memory cards.
Another extremely valuable feature enhanced by the DIGIC 5+ Imaging Processor is the EOS 5D Mark III’s choice of reduced resolution M-RAW (10.5 megapixel) and S-RAW (5.5 megapixel) recording modes. These settings are particularly useful to wedding photographers for candid photos that do not require the EOS 5D Mark III’s 22 megapixel full resolution, because they take up less space on the memory cards and speed up post-processing without losing the critical benefits of RAW image data, such as highlight and shadow control as well as white balance adjustment. M-RAW and S-RAW also preserve the full field of view rather than cropping the image or resorting to JPEG mode to reduce resolution.
High-Performance 61-Point High Density Reticular AF
For still photographers, Canon has included its new 61-point High Density Reticular AF System, originally introduced with the top-of-the-line EOS-1D X professional camera. A significant advancement over previous 5D-series AF systems, the new 61-Point High Density Reticular AF included in the EOS 5D Mark III is the most sophisticated SLR AF system Canon has ever released. All 61 points are manually selectable and sensitive to horizontal contrast with maximum apertures larger than or equal to f/5.6. The camera’s twenty one focusing points in the central area are also standard precision cross-type and effective with maximum apertures larger than or equal to f/5.6. The center five points are ultra-high-precision diagonal cross-type points for maximum apertures larger than or equal to f/2.8. The 20 outer focusing points function as high-precision cross-type points with maximum apertures larger than or equal to f/4.0. Other innovations of the new 61-point High Density Reticular AF include expanded AF coverage area, superior focusing precision and low-light sensitivity to EV -2, and greater low-contrast subject detection capability compared to earlier EOS AF systems. (See image below for AF point configuration)

About Canon U.S.A., Inc.   Canon U.S.A., Inc., is a leading provider of consumer, business-to-business, and industrial digital imaging solutions. With $45.6 billion in global revenue, its parent company, Canon Inc. (NYSE:CAJ), ranks third overall in patent holdings in the U.S. in 2011† and is one of Fortune Magazine’s World’s Most Admired Companies in 2011. Canon U.S.A. is committed to the highest levels of customer satisfaction and loyalty, providing 100 percent U.S.-based consumer service and support for all of the products it distributes. Canon U.S.A. is dedicated to its Kyosei philosophy of social and environmental responsibility. To keep apprised of the latest news from Canon U.S.A., sign up for the Company’s RSS news feed by visiting www.usa.canon.com/rss.
# # #
†Based on weekly patent counts issued by United States Patent and Trademark Office.
All referenced product names, and other marks, are trademarks of their respective owners.
Availability, prices, and specifications of all products are subject to change without notice.  Actual prices are set by individual dealers and may vary.

1 When the EOS 7D is used with the GP-E2, the following restrictions will apply: a) geotagging function will not work for movies while recording; b) geotagging features will not work for movies when using the Map Utility; c) electronic compass information and automatic time setting is not available; d) transmission via the hot shoe is not possible.
2 In certain countries and regions, the use of GPS may be restricted. Therefore, be sure to use GPS in accordance with the laws and regulations of your country or region. Be particularly careful when traveling outside your home country. As a signal is received from GPS satellites, take sufficient measures when using in locations where the use of electronics is regulated.
The EOS 5D Mark III requires a firmware upgrade to be compatible with the GPS Receiver GP-E2, which will be available soon.

This website uses cookies so that we can provide you with the best user experience possible. Cookie information is stored in your browser and performs functions such as recognising you when you return to our website and helping our team to understand which sections of the website you find most interesting and useful.